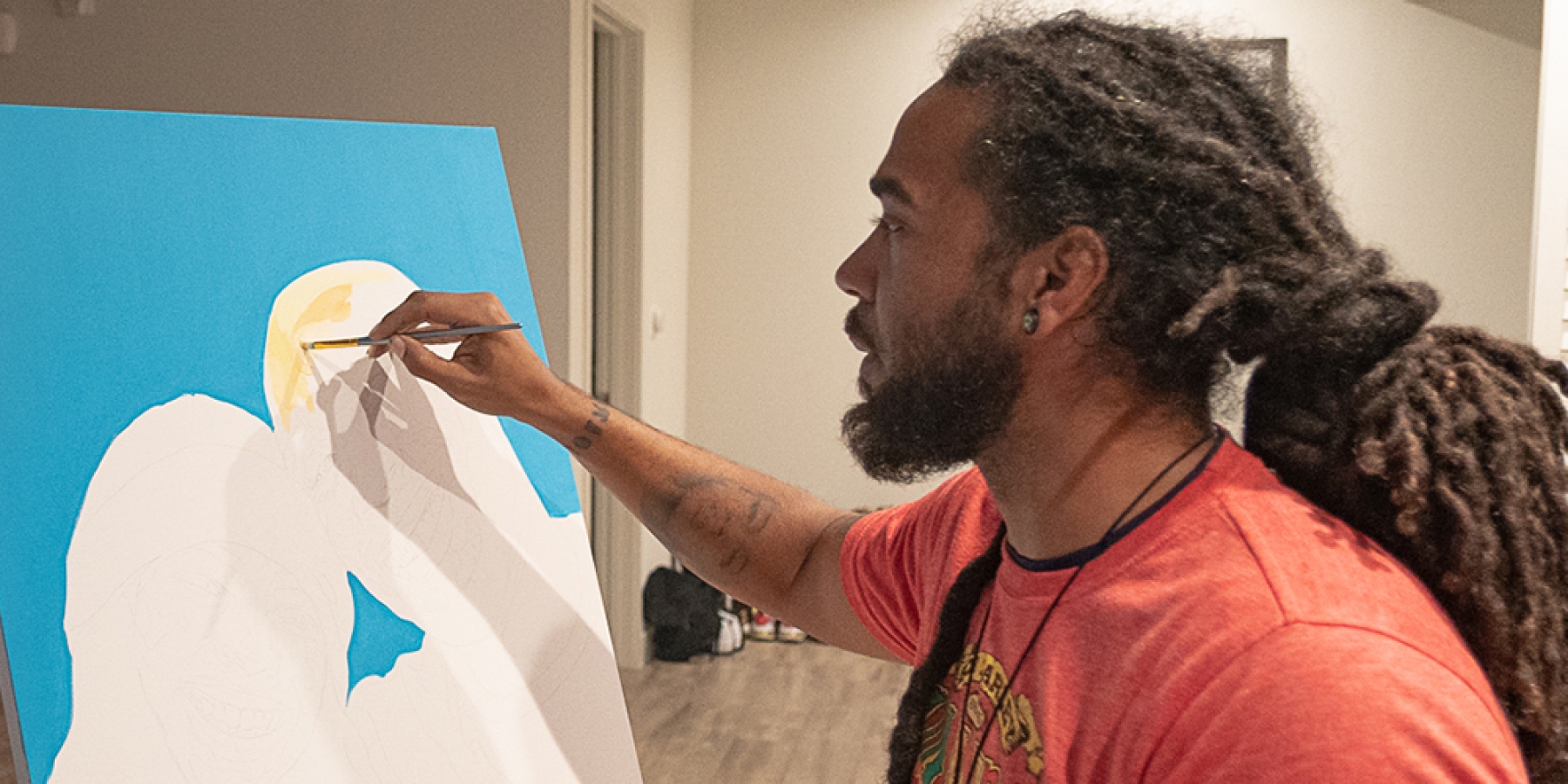 Perhaps you’ve spotted Keenan Chapman’s Nipsey Hussle mural painted at 42nd and St. Andrews in Los Angeles featuring blue and red coloring, a not-so-subtle nod encouraging unity in LA.  Or maybe you attended one of Chapman’s Sip and Paint sessions in Atlanta, featuring symbolism inspired by his travels abroad.  You may have even seen Snoop Dogg, The Game, or others post his art on their social media pages.  A native Angeleno, Chapman is an artist carefully building a legacy to impact future generations.

“Creativity is one of the most healing things you can give to someone,” says Chapman when recounting his childhood, growing up without a parent.  “You don’t know you’re killing somebody’s father the day after their 8th birthday.” He continued, “Now they gotta deal with that, every year.”  His school counselor began pulling him out of class, helping him navigate his new reality. It was there Chapman became introduced to art and how it could be used as therapy. “My sessions were talking and drawing… pictures of my father flying in the clouds or me and my mom together and crying.”

After graduating, Chapman struggled to gain his footing. “I had to learn from a couple [of] head bumps, taking a few risks and going down a few wrong paths.” Experienced in drawing with pencils, Chapman landed a job as a tattoo artist in a local shop where he discovered his love for painting. His first canvas piece inspired a bidding war. “I didn’t know it was that dope,” Chapman shares about the acrylic painting of Dizzy Gillespie. “Nipsey [Hussle] ended up purchasing it from me.”  He continued reflecting on his friendship with the late rapper that began when the two were teens. “He wasn’t naïve. He was on a mission and was fearless about what it would take to get there knowing that death could’ve been around the corner at any moment.”

In the years since Chapman’s focus has shifted to the impact and legacy, he is leaving behind. “Art is propaganda... We were griots. We’re the storytellers. We’re the ones who keep [our] history alive.”  Currently, Chapman is creating the non-profit Royal Roots Foundation, a rite of passage to introduce young boys to art therapy through new experiences and international travel for the disadvantaged and underserved. “Coming from LA and burying people in LA, you really lose sight of your options,” he laments.

Pensive and contemplative, Chapman is focused on his current piece, only inches from his face. “The mind is infinite and priceless.” He pauses mid-stroke over the canvas, a colorful image of the late Kobe Bryant and Gianna Bryant taking form. “He was somebody I planned on connecting with.”

charles bibbs
There are no comments posted here yet