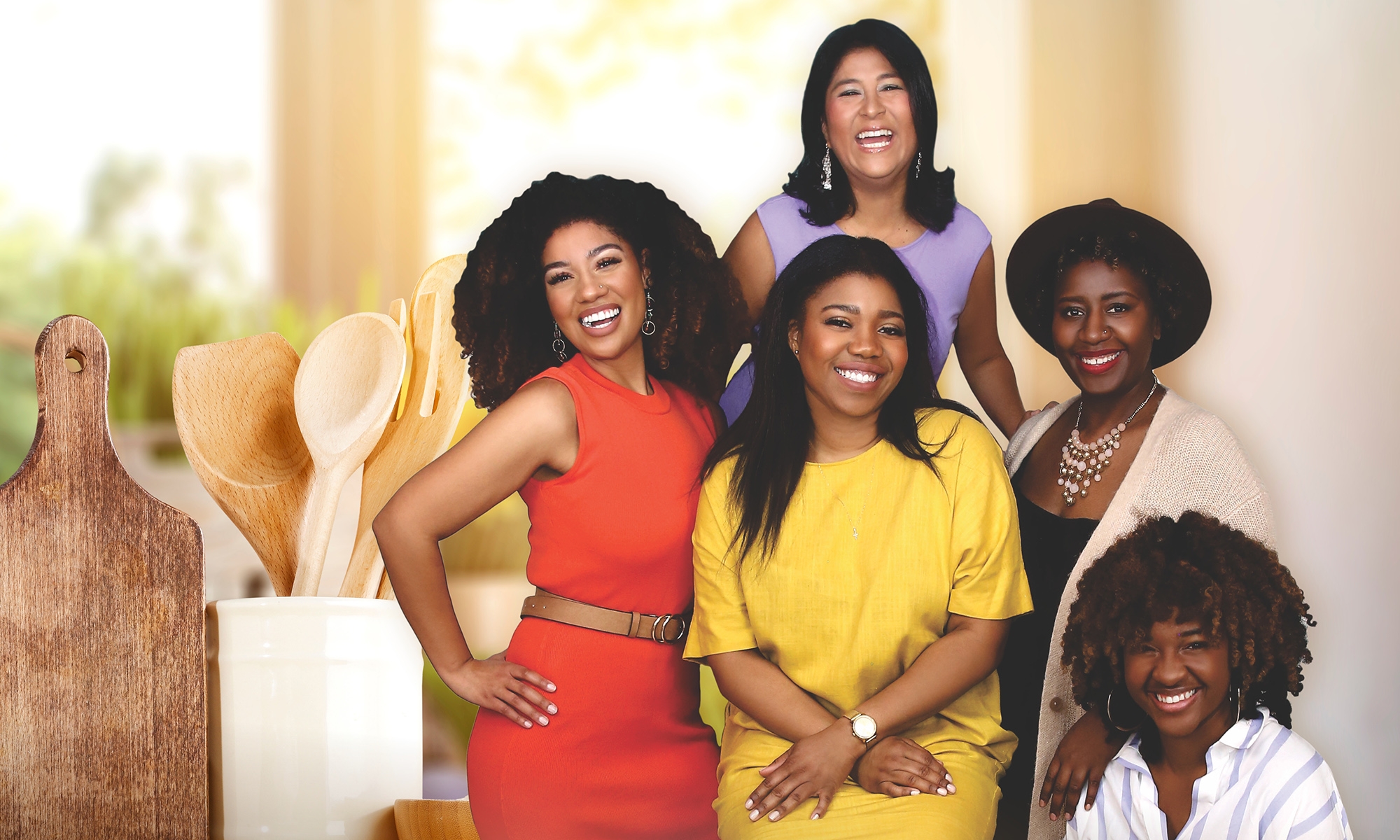 A pilot program launched 15 years ago by Black Women for Wellness, Kitchen Divas is a whole food plant-based cooking demonstration that empowers participants to learn how to make nutritious, flavorful and affordable healthy meals for themselves and their families. Through weekly ninety-minute classes taught in four locations by five incredibly talented chefs, the program provides samples of the food they prepare in class, recipe cards, bags of fresh produce, and information that help participants commit to leading healthier lives.

Having had the pleasure of interviewing all five Kitchen Divas as well as the program director, I can tell you that all six women are as uplifting as the important work they do and hold very firm convictions relative to food’s healing properties, how we should consume food, and the value being a conscious eater can bring to one’s overall health and well-being.

Sitting in one of the cooking classes on a beautiful Wednesday morning was gratifyingly eye opening as I watched a gathering of over thirty enthusiastic participants, all over 55 years of age, many who have been cooking for years, hungry for new and different information. “I’m eating better. I got vegan cheese and butter. I don’t have to go out and eat,” said a confident 75-year-old Elma Parker who is retired and has been participating in the cooking class since September of 2019.

As a professional chef herself and former cook for neo-soul singer Ledisi, Charity White, program director for Kitchen Divas, says she was drawn to the program out of her desire for people to reclaim their kitchens and understand that food is to keep our body at optimal functioning levels. As the woman tasked with moving Executive Director Janette Robinson Flint’s vision forward, Charity’s rallying call to women is: “I want people to know that they can’t cheat on their body. Choose to focus on your wellness now before all you have to focus on is your health.”

A CalState Northridge graduate, Angela Bowie, 33, is a passionate proponent of the farm to table concept of eating. Having participated in the planting of the first edible garden at an elementary school in the country, Chef Angela learned the importance of growing your own food early.

This passion persisted over the years as her relationship with food evolved, propelling her to pursue a Bachelor of Science in Food Science & Nutrition and an associate's degree in Culinary Arts from The Art Institute of California – Hollywood, allowing Chef Angela to solidify her credibility in the cooking industry.

Under the influence of chef, food activist, and owner of Chez Panisse Restaurant, Alice Waters, Angela learned to cook with fresh ingredients. This experience prepared Angela for her role as chef at UCLA's Bruin Plate Restaurant, where she has worked since 2013.

Five years later, Chef Angela expanded her culinary reach by joining Black Women for Wellness' Kitchen Divas Program. When asked what she loves about Kitchen Divas, she cheerfully responded, “I love teaching the healthy eating demonstrations to participants forty and up. To develop a better relationship with food, Chef Angela wants women to attend educational cooking classes, take time to cook at home, and realize that food is here to heal the body.

When asked what's her favorite dish to cook, Chef Angela wasted no time letting me know that she prepares a must-have kale salad that's so good her friends always ask for seconds.

People don't consider the implications of what they eat until something is wrong.  Food induced ailments take years to develop, which shows you how powerful food is.” These are the words of food and beauty influencer, Chef Brisa Marlene Slaton, 23.

Born in Central California, Chef Brisa moved to East Los Angeles in 2014 to attend Cal State Los Angeles, where she majored in business. Toward the end of college, however, she began posting pictures of food and video tutorials on her Instagram. With a desire to raise awareness about the Cal State's food pantry where she volunteered, Chef Brisa entered one of her videos in a contest and won.

Chef Brisa's love for food didn't start at Cal State, though. It was ignited at eight years old while watching her grandmother make food for celebrations and family reunions. With lots of cookbooks in the kitchen, Chef Brisa followed along as her grandmother went step-by-step to create delicious pies, yams, and rum cake, which is her personal favorite.

After her mother was diagnosed with diabetes, Chef Brisa became afraid, got checked out for diabetes herself, and with the good news of being diabetes free, she decided to eat in a preventative way. “People have a misperception that food is not really a contributor to our health and well-being when it is. That's why I'm so glad to be working with Kitchen Divas. Like my mom, some of the participants have ailments. My involvement with Kitchen Divas was strategic. I knew that it was my people that I wanted to serve.”

To develop a better relationship with food, she encourages women to plan meals and keep a food journal - without judgment - so you can see food trends of what you're eating. She uses a food app called LOSE IT to track her calories, which helped her lose forty-five pounds in eight months. Chef Brisa also encourages women to think of every new meal as a fresh start. Think of every meal as a chance to be healthier.

A health educator who taught French and Spanish for more than fifteen years, Chef Carmen Karlsgodt, 40, was lured away from teaching foreign languages and into teaching cooking after healing herself from fatty liver, depression, anxiety, constipation, and restless leg syndrome with food.

Originally from Peru, Chef Carmen graduated from UCLA with a bachelor's degree in Sociology and Cultural Anthropology and a master's degree in Spanish Language from the University of California Santa Barbara.

Determined to change people's perception of food, Chef Carmen uses her affiliation with a number of local and national health-oriented organizations, her Healthy Con Gusto food blog, her Instagram account, and her platform as a “Kitchen Diva” to sound the alarm that food is more than something to put in your mouth.

Chef Carmen wanted people to know that “Healthy food is not what it seems. It's not boring and tasteless.” When asked what she has loved about being with the Kitchen Divas program for the last year, her reply was, “My favorite part of teaching is the student light bulb moments and all the people I get to meet.”

Originally from San Diego, Chef Kyndra McCrary, 38, moved to Los Angeles in 2008 and started catering just one year later. With a love for cooking from watching her grandmother cook, Chef Kyndra has been fortunate to hone her craft by cooking for a company that traveled her to fourteen countries around the world. Finding Japan to be the most interesting and Greece and Italy the most fun, Chef Kyndra's plant-based recipes are admittedly inspired by the cultures she experienced during her global travels.

With a love for community, Chef Kyndra became a Kitchen Diva in 2019 after working with the program for the holidays. When asked what she loves about Kitchen Divas, she replied, “I enjoy the moms and grandmoms who come out to the weekly cooking classes.”

“People are starting to get it,” is Chef Kyndra's belief about the impact of the classes on the participants. And she should know because it was through “getting it” herself that Chef Kyndra was able to eliminate a pre-diabetic diagnosis by changing her eating habits and losing forty-five pounds in just six months. “I don't think most people realize that changing your diet can reverse diseases.”

Committed to spreading the word by bringing healthy eating options to the inner city, in October 2019, Chef Kyndra merged her love for food and passion for community and opened Swift Café on the infamous Crenshaw Boulevard in Los Angeles. Because the universe has a beautiful way of letting us know we are on the right path, just four months after opening, Chef Kyndra received a surprise message from a producer of Oprah's 2020 WW Tour which resulted in her café being selected as Oprah's New WW Now LA Restaurant Partner.

To develop a better relationship with food, Chef Kyndra encourages women to step out of their comfort zone.

Originally from Atlanta, GA, Chef Osunkoya Chavon, 24, moved to Santa Barbara six years ago to attend the University of California Santa Barbara, where she majored in Global and International Studies with a focus on food policy and worked with a food co-op.

The idea of being involved with creating policy to determine which neighborhoods have access to food while making sure there is curriculum and education for students around food aligned with Chef Osunkoya's communal vision which began at three years old when her mother married into an extended family that hosted spiritual community potluck gatherings where lots of people from places like Belize, Nigerian, Hatia, and the Dominican Republic would eat, dance and talk into the night. “The food was also so colorful it sparked me to create.”

As she got older, Chef Osunkoya says, “Most nights, I would be in the kitchen trying to figure out how to recreate something we ate. Mom was a cook, but my stepdad was a private chef for most of his career. We lived in the middle of nowhere, so my entertainment was watching him cook.” At 5 years old, Chef Osunkoya was involved in a car accident, the aftermath of which left her in a coma for a few days and dealing with an unexpected obsessive, compulsive disorder. This led to her being obsessive about school, but also about food—and not in a good way. Years later, she transitioned to a plant-based diet with the help of her stepdad. Led by her passion for being a community informant where food is concerned, Chef Osunkoya picked back up on her involvement with food co-ops and, in 2019, started her food education and individual consulting service called Sun Belly.

When asked what she loves about being a Kitchen Diva since joining the team in November 2019, Chef Osunkoya said, “I really like the intergenerational aspect of it. I love that I get to work with my elders and show them how to take dishes we've used for generations and then cook them better.”

Interestingly enough, Chef Osunkoya says she thinks of food as something musical. “I taste food in the spirit of music notes that you dance to. Letting food be our musical guide. Letting food guide us back to our ancestral ways.”

To develop a healthy relationship with food, Chef Osunkoya wants women to listen to your body, learn to eat with the seasons because our bodies process different ingredients at different times of the year, and be open to new traditions.