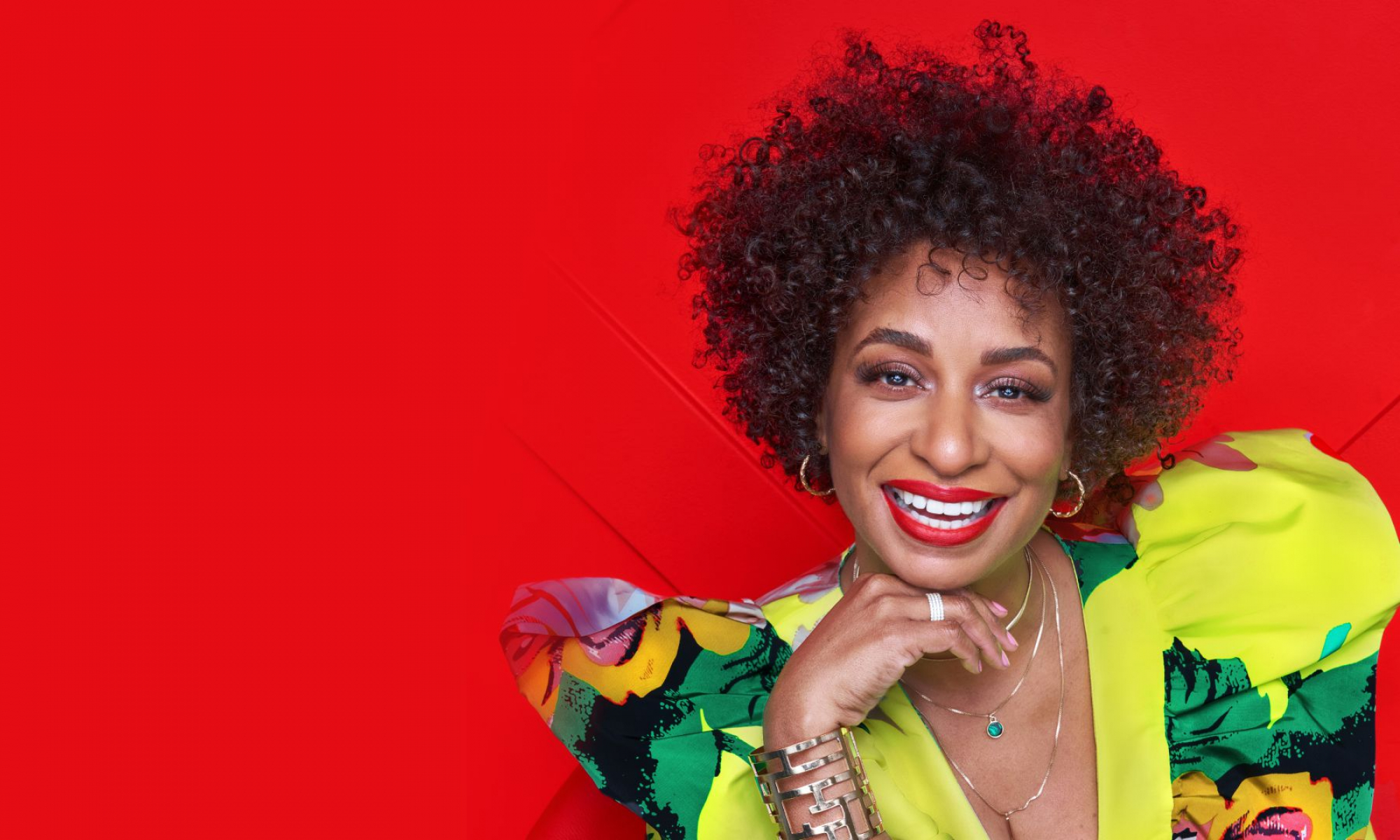 By
Ashley Yancey SuiteTalk 2021-07-01 Hits: 456
PHOTOGRAPHY BY MICHAEL R. MOORE @michaelrmoore616
FASHION DIRECTOR by DION DEMETRIES @diondemetries
MAKEUP by JORGE MONROY This email address is being protected from spambots. You need JavaScript enabled to view it.
HAIR by DaRICO JACKSON @daricomagic
Maybe you've listened to Tammi Mac on her #1 rated radio show, The Tammi Mac Show on 102.3 FM KJLH, where she was handpicked by none other than the iconic Stevie Wonder.

Or perhaps you've spotted her as the voice of reason in over a dozen TV commercials for brands such as McDonald's, GEICO, and Verizon, among others, over the years.

Or, finally, you may have spent your 2020 watching her in the evenings, wrapping up your day, on Fox Soul's The Tammi Mac Late Show, a show that focuses on "the business of being Black" and tackles everything within Black culture.

Either way, this multi-hyphenate three-time NAACP award-winning writer, producer, actress, and radio and television personality has made one thing quite clear—she is a force with no intent on slowing down.

“Most of the time, I'm working Monday through Saturday. Sundays, I try to get off, but that rarely happens either," Mac says with a good-natured smile. Between her radio show, auditions, and evening television show, she has enjoyed the high demand and the opportunities that 2020's pandemic has ushered in. "I've been working both of my jobs from home, and that's given me [some] flexibility to be able to create and work on other projects, but also to focus more on my radio show," she explains. "It's worked out really well for me in terms of being able to be more creative and have that flexibility to do more for the shows that exist and outside projects.”

“It's why so many things are happening for Black people.”

Mac's observations aren't unfounded. June 2020, Brother Vellies founder, Aurora James, launched the 15 Percent Pledge, a non-profit tasked with calling on several major retailers to commit 15% (the percentage of Black Americans) of their shelf spaces to Black-owned brands. Brands such as Target, West Elm, Vogue, and Sephora have taken the pledge. There have been numerous corporate headlines announcing promotions of new Black leadership in various industries, including entertainment, media, and publishing. Numerous top-tier high school athletes have publicly amplified HBCU programs and the unique advantages they bring, such as Makur Maker and Mikey Williams. According to The Undefeated, hundreds of millions of dollars from new sources have been donated to these institutions. And finally, according to the Wall Street Journal, Black banks saw an increase in new accounts and deposits made in the wake of 2020's protests for Black lives.
“I have access to more people.”

For the time being, Mac has enjoyed working from home. The unique setup has allowed her to connect with many of the people making newsworthy headlines without the stress of managing travel logistics and complicated hair and makeup schedules. "I like doing the Fox Soul show from home because I have access to more people, so the show doesn't seem as local. I have access to people in Atlanta, Philadelphia, and Detroit. I love that the show is more international because everybody can Zoom into the studio. When we go back in, I don't know how I'll handle doing my hair and my makeup with a 30-minute transition from radio to television," She laughs. "What I know is God is gonna work it all out! I'm not gonna worry too much about it and stress too much because history shows that it always works out."

Over the years, Mac has interviewed countless figureheads, from politicians to entertainers to actors and comedians. "I always love when Stevie Wonder comes to visit and shares the co-host seat with me. It's always fun to dig into those Stevie Wonder stories," she says with her trademark smile. "I had a really great interview with Steve Harvey when I was doing radio in Birmingham," Mac recalls. While co-hosting with Rickey Smiley, she remembers Smiley having a chip on his shoulder, frustrated that Harvey never shared his comedian jobs. "By the time the interview was over, [Harvey] had answered the questions so freely and so openly that he and Rickey Smiley became the best of friends! He got Rickey Smiley his own radio show; he let us host the Kings of Comedy; that was a flip for me."

One interview, in particular, stands out. "One of my most inspiring interviews was with the [musician and singer] Lucky Daye. He was very transparent, and he talked about how his mom was a part of a cult and how he had wanted to get away from that. He ran away at an early age, lived on his own, and decided that he was going to read the entire Bible from cover to cover and speak to no one," She explained. "He kind of secluded himself after he ran away from home, to kind of learn what God was about on his own without anybody else's interpretation. He can quote any scripture." She says as she nods her head in affirmation. "We talked for a very long time, and he said that he had shared those things with me that he'd never ever shared because most people don't do the research before they talk to him. And so they don't even know to ask any of those questions about him."
“I feel like I was literally purposed to be LA's voice.”

Everybody's looking for salacious stuff these days to kind of *catch you*. Every interview now is a *gotcha* interview. 'Ooh, what can I get? How can I get something where I can get a nice little bit, or a nice little slip and become viral?!'" While Mac understands it, she doesn't like it and avoids approaching her subjects that way. "It's pretty much the direction that viral podcast and radio shows are going now… I don't want those types of interviews anymore. I don't want to hang somebody out to dry or make them say something that [makes them remark to themselves] 'Damn, I shouldn't have said that.' I feel like I was literally purposed to be LA's voice and the way that LA shows me love and the way that they nurture me in the way that they guide me."

This deliberate interview approach has become Mac's trademark and is one that she embraces. "I want to uplift my Black people. I want to make them share experiences that make you feel good about life or that teach us to maybe think in a different way or have a different point of view." Even when met with a disparate story or subject, Mac is determined to find the lesson and will turn it into a cautionary tale. "You can tell me [you slept with three different people on the same day] if you want, but I'm still gonna go in a different direction... 'Okay, so you slept with three different people. What did you learn from that? Is that something you intend to keep doing, and if so, how does that make you feel? What is it about?'" Ultimately, Mac aims to be a truth seeker and storyteller. "What I live to do is to heal our community with the truth. And so that's what I strive for. I think the Black community needs healing right now, and I think more than healing, we need truth. And so I always put truth in my interviews, by any means necessary."

When it comes to pushback to her approach or her overall place in the industry as a Black woman, Mac remains relatively undeterred, putting her trust in her expertise and experience. In a market like Los Angeles, where out of 100+ radio stations, only one is Black, Mac acknowledges a disparity, but she doesn't let it discourage her or prevent her from going after what she wants. "I don't really like to dog out the industry because the industry has been very good to me. Radio has been my life since I was 15 years old, and I've always had men who have always helped me thrive in radio. It's always been a part of my life. When I don't get a job, I know I didn't get the job because I wasn't talented--I mean, come on, this is what I do! I can push the buttons in my sleep. I can tell you about a song and an artist like that! I come with a wealth of knowledge, I come with a wealth of talent, I'm not playing, and I take it very seriously. So, it doesn't bother me when I don't get jobs because I'm just like, 'Oh, they missed out.'"

"I believe in God, and I believe once you start, everything takes off from there. Doors begin to open that you wouldn't imagine; people start throwing stuff at you." While she always wanted to be an actress and would regularly attend auditions, Mac was 15 years old when she began working at a local Houston radio station answering their phones while impersonating different characters she created, her own form of acting. "There is a genuine connection between the audience and the radio personality when it comes to radio, and I love that connection." After a year, she managed to snag an on-air role, where callers from the phone line would dial in and recognize her, which helped boost her popularity, and from there, her love for radio was born.

When she needs to decompress from her shows, auditions, and writing endeavors, Mac is a big fan of LA's commitment to health, wellness, and culture. My 2 Cents LA, G/S Game Sports Bar Restaurant & Lounge, and Harold & Belle's are some of her favorite eateries in town.

Bike riding to the Porter Ranch Park and visiting Lake Balboa and Zuma Beach are some of her favorite local lowkey outdoor spaces. "There's never anybody [at Zuma Beach]! I just go there to watch the sunset or the sunrise. And I don't have to pay for parking."

In the coming months, in addition to finishing her movie script, doing her radio show, and late-night television show, Mac is also acting and will appear as a recurring character in the new television sitcom, Partners in Rhyme, starring, and executive produced by MC Lyte.

While she hopes to be bi-coastal one day, sharing LA with her hometown of Houston, she admits that Los Angeles will always have a piece of her heart. "I literally feel like the city of LA has adopted me. Like, I feel so connected and so close to this city. And, and, and...I feel like it in regards to the Black community."

You can tune in to The Tammi Mac Show daily at 102.3 FM KJLH Radio from 3-7 pm PST. You can catch The Tammi Mac Late Show, daily on all digital platforms (Apple TV, Roku, Zoomi, Tubi, FoxSoul.tv, and YouTube for live chat) at 8 pm PST / 11 pm EST. Partners in Rhyme will be premiering on UMC/AMC’s network streamer.